When we import opening stock balance into inventory journal using the standard import/export functionality, the most common problem is dealing with Inventory Dimension id (InventDimId). We might know the warehouse and batch, but we do not know what is the InventDimId that represents the combination of these two inventory dimension.
One way to do this is to lookup the InventDimId value manually before performing the import. This is only possible if very few inventory dimensions are used.

An alternative is using the Custom import functionality to import stock balance CSV file into Tag counting journal.
There is a conversion functionality in the Custom import, where you can write a little X++ code to find the InventDimId using the inventory dimensions.
Here is an example of finding the InventDimId using Site and Warehouse dimension. 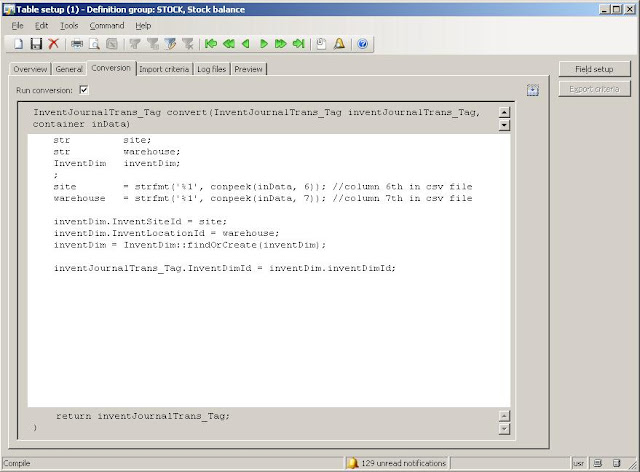 Change company from the current company in X++ code

Change company from the current company in X++ code

If in any point you need to change change company during the code, This example will helps you to change the company from current company in x++ code.

This Post is intended to provide a consolidated list of published documentation from Microsoft site, tools, as well as tips and tricks to aid in the process of upgrading to Microsoft Dynamics AX 2012.

Email ThisBlogThis!Share to TwitterShare to FacebookShare to Pinterest
Labels: ax 2012

Dynamics AX 2009 consists of sixteen application object layers that contain all the
elements you see in the AOT.
These layers can be looked at as an onion with multiple layers. In the middle is the
core application in the SYS layer and the outermost layer is the user layer USR.
Therefore, when any application element is being executed the system will look at
the outermost code layer first to see if there is any code for that element; if not, it peels a layer off the onion, and tries the next layer. When it hits a layer where the element exists, it will use the code from this layer, and will not continue to peel off layers to find code for that element in the innermost layers.
Layers with their description

HFX HFX is an application object patch layer reserved by
Microsoft for future patching or other updates.

SL1, SL2,or SL3 A layer where the distributor can implement
vertical partner solutions.

BUS When a business partner creates their own generic solution,
their modifications are saved in the BUS layer and the top-
level application objects are used.

CUS The supervisor or administrator of an end user installation
might want to make modifications that are generic to the
company. Such modifications are saved in the CUS (CUStomer)
layer.

USR End users might want to make their own modifications, such
as in their reports.These modifications are saved in the USR
layer.
-Harry
By Deepak Agarwal - December 05, 2012 No comments:

Workflow configuration error in Dynamics Ax: 401 Unauthorized
Some times we faced unusual error after installing Dynamics AX Workflow: “401 Unauthorized” after running Workflow infrastructure configuration wizard
(Dynamics AX –> Administration –> Setup)
at the first time installation of Dynamics Ax then you should go through the following steps….
It is mainly happening when database, AOS, Application and workflow servers are individual (especially workflow & AOS and Database server)
The output:

After completing above procedure successfully then please take a restart of Ax and IIS service and then workflow infrastructure configuration wizard will work fine.

Email ThisBlogThis!Share to TwitterShare to FacebookShare to Pinterest
Labels: Errors and Solution

Sometimes happen that SysMailer class (using CDO) is not the right solution for sending mails with attachments. There is a little sample of X++ Job that is using System.Net.Mail namespace to achieve same.